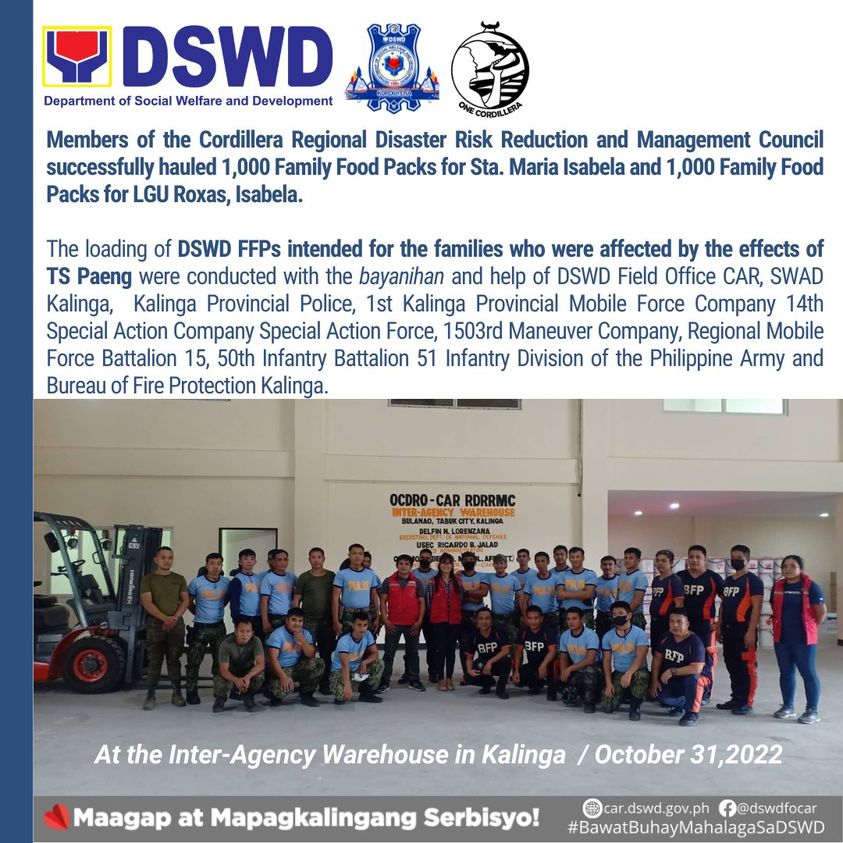 BAGUIO CITY-With the continuous gustiness of strong wind and rain brought about by the effects of Severe Tropical Storm Paeng, Edrico Palet-ang and his family stayed in their neighbor’s house. After having lunch on the week of October 30, 2022 at around 1:30 in the afternoon, the wind brought about by the effects of the Storm completely blew away their house that was made of wood and iron.

Aside from recorded damages to properties, the effects brought about by the storm did not also spare lives in the Cordillera Administrative Region. Seven persons attained injuries while one person was identified dead by authorities as Mr. Severino Lumacday from Balbalan, Kalinga after he fell off to the ravine that continued to the river due to the slide debris that was continuously falling and was very slippery and unsafe.

His body was found and was positively identified by his relatives at around 11AM of October 31.

Palet-ang is very grateful for the PHP 10,000 cash assistance he received after it was declared that their house was declared totally damaged based on the assessment of DSWD social workers. He is one of the beneficiaries in the region who received cash assistance through the AICS cash assistance of the Department of Social Welfare and Development Field Office Cordillera Administrative Region.

For the family of Lumacday, DSWD Field Office CAR through SWAD Kalinga Crisis Intervention Unit also reached out to his family to deliver PHP 10,000 cash assistance.

As of November 18, based on the terminal report of the Field Office, 6 provinces of the region including 47 towns, 277 barangays with 11,594 families and 38,446 individuals were recorded as the total affected areas and population with 632 partially damaged houses and 25 totally damaged houses recorded.

The Field Office CAR provided a total of PHP 12, 646, 938.05 Cost of Assistance including 18,121 Family Food Packs (FFPs), 819 Non-Food Items (NFIs), and 112 recipients of financial aid through Assistance to Individual in Crisis Situation or AICs.

On Nov. 2, 700 DSWD Family Food Packs and 1,842 Hygiene Kits were also delivered to the municipality of Calansan, Apayao to augment the relief operations in the town that has been placed in a state of calamity since of October 20 due to consecutive weather disturbances that lashed through the town.

DSWD FOCAR led by Regional Director Leo L. Quintilla during the Virtual Response Cluster Hub meeting with the members of the Cordillera Regional Disaster Risk Reduction and Management Council (CRDRRMC) assured the members of the CDRRMC Disaster Response Cluster that DSWD, as the lead agency and the Vice Chairperson together with its resources, is ready, having enough FFPs, NFIs and funding to support the operations and any disaster incident here in the region as well as other Field Offices affected by the storm including neighboring regions- Region 1 and 3.

Director Quintilla thanked all the member agencies for their support to the disaster response operations of the response cluster.

“DSWD FOCAR is grateful to the member agencies for their support rest assured that all actions will be closely coordinated responding to the different disaster incident in CAR including the 7.0 earthquake, the last three typhoons, and the 6.4 earthquake,” Dir. Quintilla added.
Office of Civil Defense CAR Regional Director and Cordillera Regional DRRM Council Chairperson Commodore Albert A. Mogol (Ret.) also commended and congratulated DSWD FO CAR for leading the timely cluster meeting.

“OCD CAR declared the standard as soon as the transition from preparedness, the Chairperson for response will automatically assume full responsibility for all the response through the response clusters. OCD CAR is a Member of the Response Cluster taking care of the logistics in coordination with the vice chair for response. We will be maintaining virtual AOC for fast coordination,” stated Dir. Mogol .

He added that OCD-CAR will be coordinating with the members of the Logistics Cluster and the agency pushed for continuous coordination to be able to move resources on time especially to the isolated areas.
At the Regional Operations Center of Field Office CAR, members of the Quick Response Teams monitored and closely coordinated with the member agencies and mobility assets to ensure speedy response and the replenishment of prepositioned FFPs and NFIs. # DSWD FIELD OFFICE CAR, SOCIAL MARKETING UNIT, LAUREN ALIMONDO with reports from EDEN FAITH FATANER.