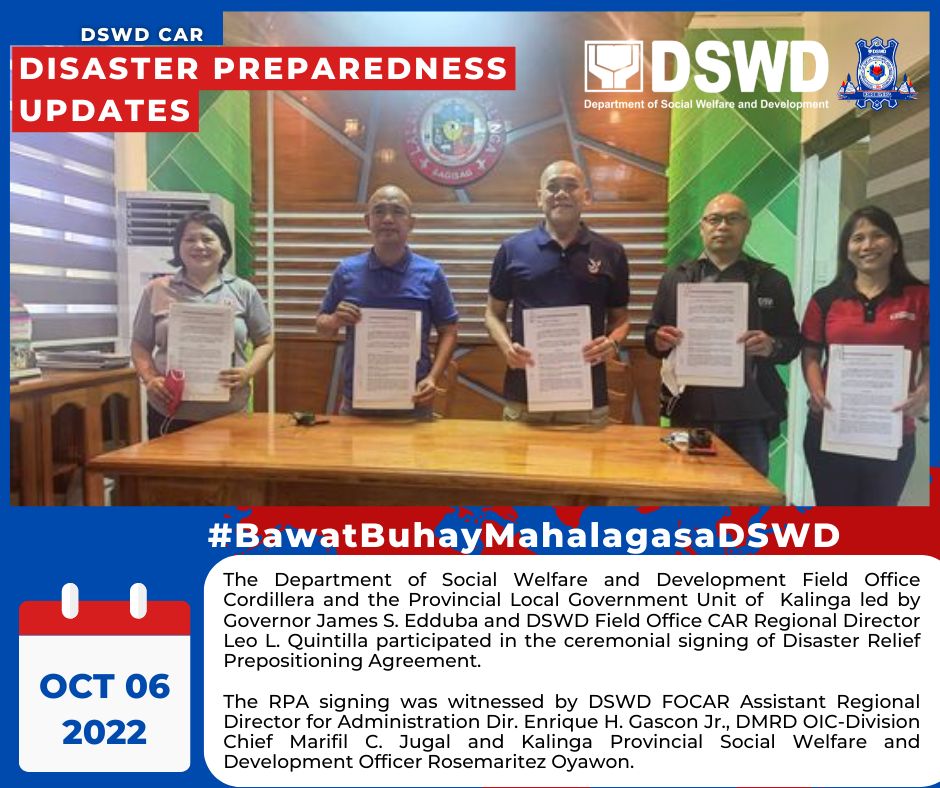 In a town where rough roads remain a challenge during rainy season, prepositioning of relief items remain vital to ensure efficient delivery to affected families or communities affected by calamities.

This was the message of Tineg Mayor Brethen Jireeh Gallardo Crisologo when asked of the Relief Prepositioning Agreement (RPA) between their town and the Department of Social Welfare and Development Field Office Cordillera Administrative Region (DSWD Field Office CAR).

“Dakkel launay ti tulong iti Relief Prepositioning kangrunaan ngamin ket ada kakailyan karkaro ditoy Upper Tineg narigat ti dalan da, karkaru nu agtudtudu ditoy Tineg isunga agyamyaman kami iti ahenisya iti DSWD ta paraburuan ti relief prepositioning. (The Relief Prepositioning is a big help to the town. Most especially to the communities in Upper Tineg with the presence of rough roads in the area most especially during rainy season. That is why we are grateful to the Department of Social Welfare and Development [Cordillera] for this relief prepositioning),” he narrated.

On July 19,2022 the agency piloted the signing of RPA in the municipality of Banaue, one of the affected towns of the massive flooding and mudslide on July 7. During the RPA signing, Both Banaue Mayor Joel D. Bunggalon and Vice-Mayor Donald I. Mongolnon expressed their heartfelt gratitude to the agency for the conduct of the RPA and choosing their town as pilot for the agreement.

Regional Director Leo L. Quintilla said the RPA is a preparedness measure in efficiently responding to LGUs emergencies or disasters. “The DSWD Field Office Cordillera continues to ensure the supply of Food and Non-Food Items for the possible needs of communities in the region through strategic placement of resource augmentation to identified warehouses/storage facilities.”

Under the agreement, the LGU must provide goods to the affected families during a calamity and for the LGU to identify a storage facility to house the Food and Non-Food Items (FNIs) from the agency. The LGU is also asked to monitor the relief items and ensure the agency’s policy of ‘first in-first out’ is implemented in the issuance of the goods.

In the Cordillera region, 50 towns and cities out of the 77 towns and cities have already signed RPA with the DSWD Field Office Cordillera as of September 21, 2022.Breakdown shows: Abra with 25 towns, Apayao and Mt. Province with 5 towns, Benguet and Ifugao with 6 towns, Kalinga with 3 towns with RPAs while three RPAs are signed with the Provincial Local Government Units of Abra, Apayao and Kalinga.