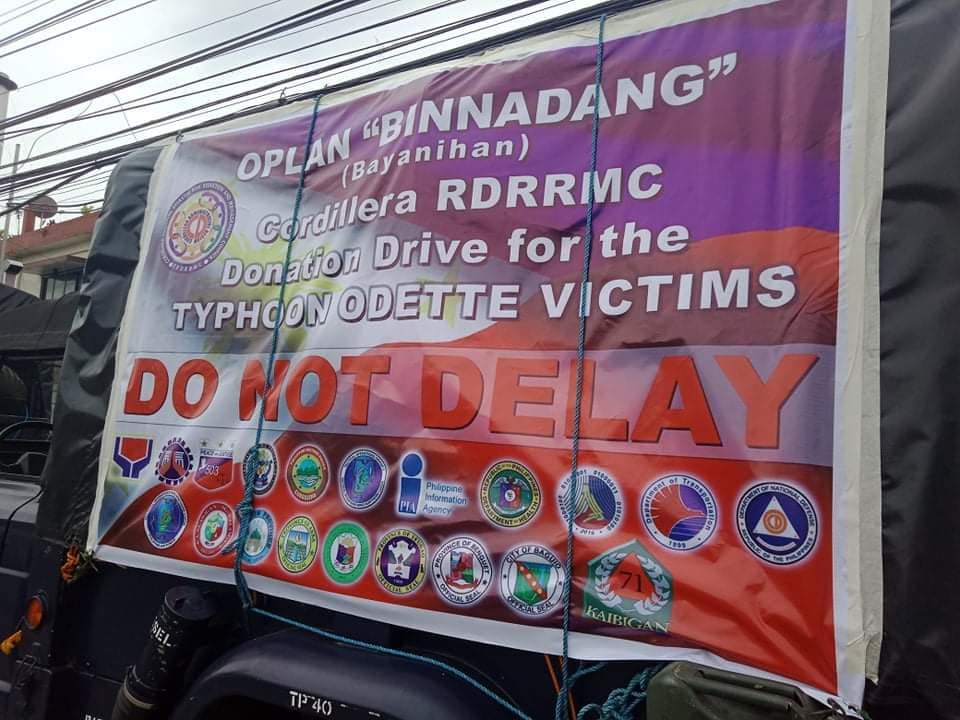 BAGUIO CITY- It was the determination and the spirit of Binnadang (Bayanihan) of member-agencies of Cordillera Disaster Risk Reduction and Management Council (CDRRMC) that led the delivery of disaster response augmentation support to affected by Typhoon Odette.

The relief items from Department of Social Welfare Development Field Office Cordillera Administrative Region (DSWD FO CAR) and donations from various donors in the region was delivered with the help of men and women of the CDRRMC who have worked day and night in order to ensure the provision of relief items.

DSWD FO CAR, as the lead for the Regional Response Cluster together with the CDRRMC chairperson Office of Civil Defense Cordillera (OCD-CAR) led the Oplan Binnadang, a mission to transport and distribute food and non-food items collected from the different parts of the region to the affected population of the typhoon.

“Binnadang” highlights the Bayanihan Spirit of the Cordilleran’s to help communities affected by the typhoon.

The relief items proceeded to Clark Airbase where the relief goods will be airlifted to communities in Region VIII.

The agency is also ready for augmentation to Region IVB with a total of 5,000 FFPs, 8,000 Malong, 35 rolls of laminated sacks and 200 collapsible water container is the initial commitment of the agency for Field Office IV-B. Ongoing coordination for the possible delivery of the relief items.

For those who want to donate to the typhoon victims, a donation desk was organized for Oplan Binnadang set at the DSWD CAR Main Office.

For the donations received through the DSWD FO CAR Operations Desk, as of December 31, 2021, donations worth Php 83,770 comprised of Bottled Drinking Water: 188 boxes equivalent to 4,336 pieces, 150 blankets were turned over to the agency.

Aside from the Food and Non-Food Items, DSWD FO CAR is ready for the deployment of INMARSAT emergency telecommunication equipment and response and recovery teams for augmentation for the following regions: CARAGA, Region VI, VII and VIII.

As of writing the DSWD FO CAR is also preparing for the possible delivery of relief items to Region IV-B.

DSWD FO CAR Regional Director Arnel B. Garcia, CESO II thanked all the member-agencies of CDRRMC for the first and second tranche of Food and Non-Food items delivered to Clark Airbase for relief augmentation to Typhoon Odette-affected communities in Region VIII.

The Disaster Response Management Bureau earlier pronounced the necessity to combine and push the FNI resources to areas affected by the typhoon without compromising the level of stockpiles for entaultiy that may arise.

In the exigency of service, the DRMD and all field offices are directed to maximize the repeat order option for the previous successful procurement activities and exploration of negotiated procurement under emergency cases. # DSWD FIELD OFFICE CAR, SOCIAL MARKETING UNIT, LAUREN ALIMONDO