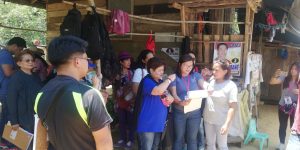 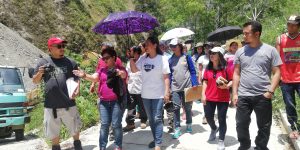 The Regional Project Monitoring Committee (RPMC) of the Regional Development Council (RDC)-CAR conducted monitoring and validation of completed and on-going sub-projects of the DSWD Kapit-bisig Laban sa Kahirapan-Comprehensive and Integrated Delivery of Social Services (Kalahi-CIDSS) in Ifugao on April 29-30 2019.

The RPMC headed by RDC Vice Chair and NEDA-CAR Regional Director Milagros Rimando led the visit in Barangay Abatan in Hungduan, Ifugao where they inspected the concreted farm-to-market roads (FMR) implemented during the third and fourth cycle of the DSWD Kalahi-CIDSS. The FMRs are worth more than 2.4 million pesos.

The Committee also met with the community volunteers and local government officials and employees to listen to their experiences in implementing community-driven development (CDD) projects. During the discussions, community volunteers who are also the beneficiaries of the sub-projects expressed their gratitude to the Department.

“We can feel the improvement in our barangay. We can now easily transport our vegetable and fruit products to the market,” Community volunteer-turned-Barangay Kagawad Alberto Callatan said in vernacular. He added that the implementation of the sub-projects provided them temporary employment.

Community volunteer Sheryl Rumbaua also affirmed that through the trainings they were empowered to procure materials for their own sub-projects. “We did not study in a formal school but we learned how to canvass materials and how to evaluate bids from suppliers,” she said.

Maximizing their time in Ifugao, the committee proceeded to Barangay Antipolo in Asipulo, Ifugao to monitor the on-going 380 linear meters farm-to-market road sub-project under the same program.

Being the first municipality to institutionalize CDD through their Pan-aamungan (Convergence) Program, the RPMC inquired about their strategies in implementing barangay development projects.

Mayor Armando Domilod said that one strategy that makes their implementation systematic is the “man-ili” system. “The barangay members are divided into “man-ili” (community organizations) who can be mobilized easily during implementation. The scheduling of community work for each “man-ili” allows the residents to attend to their farms and their families,” he added.

The Mayor added that the “man-ili” can also be mobilized easily during community affairs such as weddings, festivities and wakes.

The RPMC recommended that the institutionalized CDD of Asipulo – the Pan-aamungan Program should be shared for other Local Government Units to adopt.

They also recommended that the community should strengthen their operation and maintenance action plans to solve minimal problems on the completed sub-projects. The community or DSWD may also request fund from other concerned agencies to address other community infrastructures and facilities needed and identified by the residents.

The RPMC also visited other government projects in the province such as the on-going construction of the Ifugao General Hospital.

The visit in Ifugao is part of the RPMC’s mandate to monitor and evaluate development plans and programs, and provide recommendations to appropriate agencies.

The RPMC is composed of representatives from private sectors and government agencies namely National Economic and Development Authority, Presidential Management Staff, Department of Budget and Management, Department of Interior and Local Government and Philippine Information Agency.

DSWD Kalahi-CIDSS under the National Community-Driven Development Program modality has been implemented in selected municipalities in the Cordillera for four cycles since it was launched in 2014. Ideally, one cycle of the program takes one year to implement.    #DSWD-CAR, SOCIAL MARKETING UNIT, Jasmin P. Kiaso with reports from Wilber Fidel