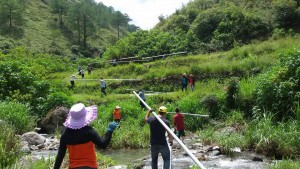 Kapit-Bisig Laban sa Kahirapan Comprehensive and Integrated Delivery of Social Services (Kalahi-CIDSS) Project stakeholders in the municipality of Buguias, Benguet Province worked in sync in carrying 115 pipes, each of which weighing 33 kilograms, to the project site of the water system where the construction of five tanks is on-going in Barangay Poblacion. The community together with DSWD staff and the PNP joined this activity thus making the task faster and easier. They passed through two creeks, a 50-meter hanging bridge and the usual mountainous terrain in the Cordillera to reach the project sites. This contributed to the construction of the water system funded under the Kalahi-CIDSS Project of the Department of Social Welfare and Development with counter part from the local government unit.