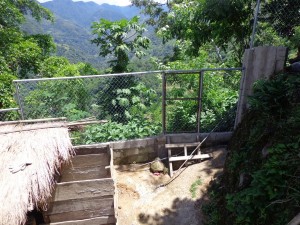 Kalinga Province– It’s an ordinary day in Barangay Galdang, Pasil with residents going to and fro on their daily routines. You wouldn’t possibly know what out-of-the-ordinary stories the community may have to tell unless you sit and listen to them over a cup (or even more) of their rich-tasting coffee.

During one of those seemingly trivial coffee sessions in Barangay Galdang, Pasil, Kalinga, Punong Barangay Jose Bakidan boasted about how their Fall Protection brought them several benefits they have not foreseen.

The project which was completed in 2013 during the second year of Kapit-Bisig Laban sa Kahirapan Comprehensive and Integrated Delivery of Social Services (Kalahi CIDSS) Project implementation in the barangay helped them garner one of the most prestigious award in their province, Bakidan says.

The Fall Protection constructed along the residential houses is not just a fence since it has secured the residents from the fear of erosion or tripping over the cliff.

Most of all, the structure has ended the irresponsible dumping of garbage as it has barricaded the residents from easily disposing their wastes over the cliffs.

The residents were also encouraged to plant backyard vegetables and fruit trees as it is now protected from animals or people who may destroy them while passing through the pathway. Now, some have been harvesting eggplant, spring onion, and string beans for their family’s consumption.

Meanwhile, one of the major reasons for the community to push for this project was the two counts of accidents in the area trailed by the Fall Protection. The community has been clear on their purpose that nobody should be a victim of falling again from that side of the barangay.

With the introduction of Kalahi-CIDSS Project in their municipality, community volunteers listed the construction of Fall Protection as their top priority.

After its construction, Bakidan says that they have seen the benefits of such simple infrastructure. Coupled by the knowledge on environmental protection they have acquired from seminars provided by the Kalahi-CIDSS Project, they were inspired to keep their barangay clean and green.

They then started their quest to become one of the healthiest barangay through information and education campaign and by first putting “No Dumping Here” sign boards.

The barangay has also strengthened its implementation of the ordinance on proper waste disposal. Trainings on waste management such as recycling, creating decorations from plastics or papers and composting has been conducted by the Barangay Local Government Unit.

Moreover, as an operation and maintenance activity for the fall protection and for a healthy environment each sitio was scheduled for the regular clearing and inspection of the structure.

Indeed, the structure is physically a fence but one could be amazed how it linked the barangay to strive for a safer and healthier environment.

Kalahi-CIDSS Project is one of the poverty alleviation programs of the Philippine Government. The project uses the community driven development approach which brings empowerment to the people through various capacity building activity provided. Included in these capacity building activities is the Thematic Environmental Management System (TEMS) which promotes the preservation of the environment within communities implementing the said Project. #DSWD-CAR, SOCIAL MARKETING UNIT, JASMIN P. KIASO with Christina Chinalpan, Community Empowerment Facilitator