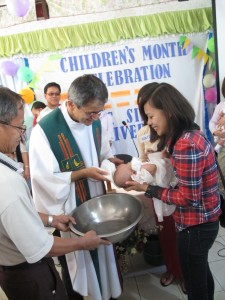 Cordillera Administrative Region– There was a feeling of unfamiliarity as I walked into the hall of the Reception and Study Center for Children (RSCC) located in Puguis, La Trinidad, Benguet. I expected to see the children who reside in the said center, their house parents, some volunteers and guests to take part in a celebration. But what I saw was something that gave me the feeling of home as the area was filled with children playing or being cuddled.

The RSCC is one of the temporary residential care facilities run by the Department of Social Welfare and Development (DSWD). It provides interventions to abused, neglected, abandoned, surrendered, and exploited children and those with special needs such as children at risk and children who are in need of alternative family care.

RSCC was then called Lingap Center which catered to clientele of various categories including disadvantaged and abused women and children in conflict with the law. Overtime, the center was developed into a facility which focuses in the provision of care and protection to children 0-6 years old.

“Through baptism, we welcome the children to our community- to the Christian community. We are called to become mothers and fathers but there are times that we fail to do so. By baptizing the children, we are protecting them from everything that is evil.” Fr. Costa shared.

Meanwhile, DSWD OIC- Regional Director Janet P. Armas expressed gratitude for the continuous support given to the children in the RSCC.

“We appreciate not just the donations, but most importantly the time, care, and love that we are giving to the children. Sana ipagpatuloy natin ang pagmamahalan sa ating mga pamilya at ito ay palawakin natin sa ating komunidad para matapos na ang pang-aabuso sa mga bata. This will be possible if we come together to stop abuse. Let no child be left behind”, Dir. Armas added.

This re-iterates this year’s theme for the National Children’s Month celebration which is “Komunidad at pamahalaan, magkaisa. Pang-aabuso sa bata, wakasan na!”.

As of November 2015, there are 32 children being catered to in the RSCC. “These children have not yet found the family that they could call their own but we are positive that they will be able to have that through foster care and adoption. We would also like to encourage interested individuals to also visit the other centers such as the Regional Rehabilitation Center for the Youth and the Regional Haven for Women and Girls”, Dir. Armas added.

With the support, love and care that the center staff and volunteers give to the children, indeed, RSCC is not just a facility but a home. # DSWD-CAR, Social Marketing Unit, Nerizza Faye G. Villanueva